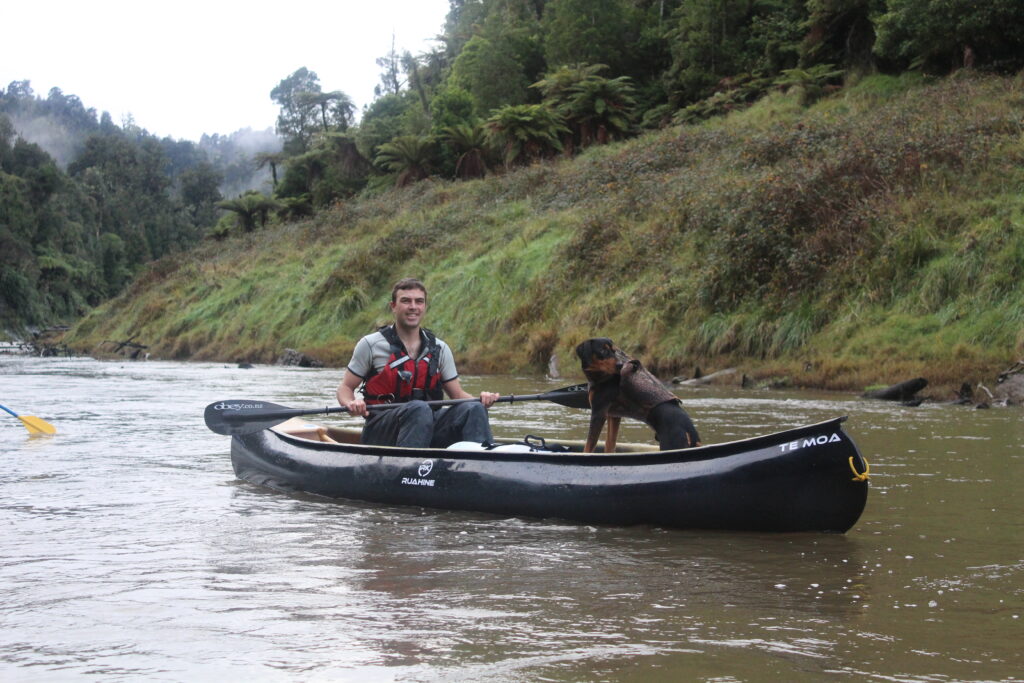 The Whanganui River is well known as a fun trip for Canadian canoes. In summer time it’s classed as a great walk and in pre covid times hundreds of people paddle it every week. This trip was slightly different however, as outside of the great walk season hunting is allowed and our Deerstalkers Club decided to organise a hunting trip. I was especially excited as I had a new Canadian canoe mould so I custom built a canoe for this trip.

Eight of us met at the club on Thursday after work. We were a mix of hunters and tourists, with a mix of different canoes and even a double kayak. After a 5-hour drive, we made it to the Whakahoro campsite and expecting to have to pitch tents in the dark, we were pleasantly surprised to find the old schoolhouse deserted and fully set up like a DOC hut, luxury!

The river trip began at around 8.30 am on Friday morning. There was a fun energy pervading through the group. It felt like a mix of nervousness, excitement, and the thrill of the unknown. The river was running high and it was the middle of winter so we didn’t really know what to expect. The dogs could feel it and were causing all sorts of havoc. I think Reuben got the tone about right by cracking the first Canadian Club. A Canadian in a Canadian haha.

At Whakahoro you start the trip in a side stream which enters the Whanganui aprox 1km from the launching ramp. The stream is slow and willow choked but the minute you enter the main river it’s game on. We had a 37km paddle to the John Coull hut and were expecting it to take 6-7 hours, but with the high river level we averaged 7km/hr so it turned out to be a pretty cruisy day. Five minutes from starting, the first mob of goats was encountered and I believe they pretty much set the tone of the trip. For the sake of this article I won't go into the details of the hunting, but I will say that goats cause significant damage to our native bush, far worse than deer, so it's necessary to control them.

Day one ended at the John Coul hut and it was deserted like everything else we encountered. Later on, I was sitting next to the river writing my hunting diary when I looked up and spotted a goat on the opposite bank. I raced up to the hut and one of the young members quickly sorted it out...it's a real problem if goats are that numerous they come out next to a hut. 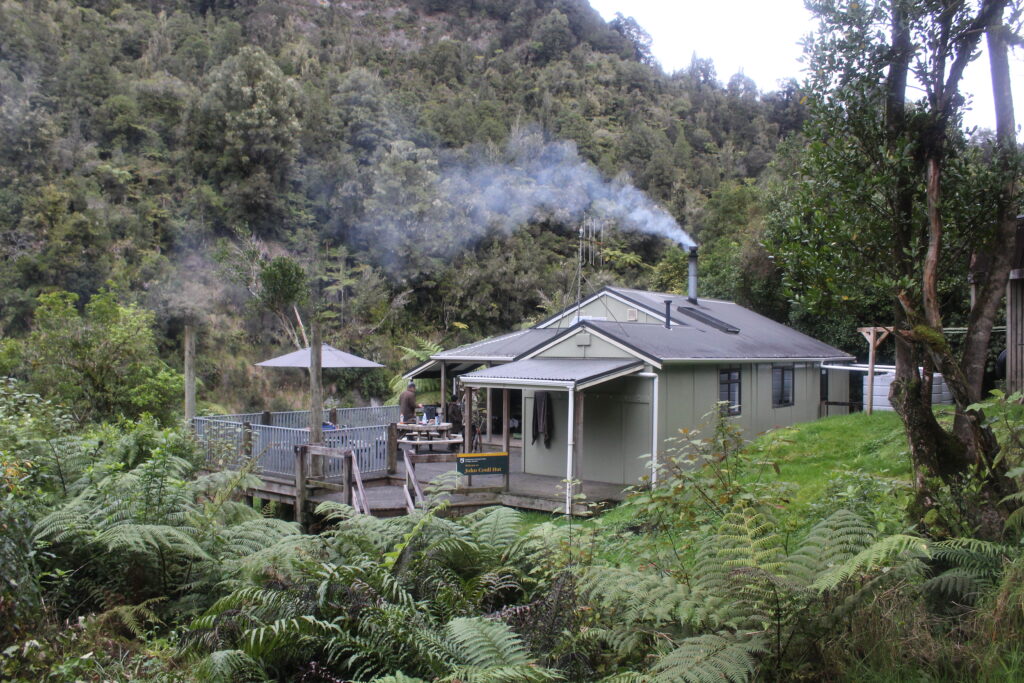 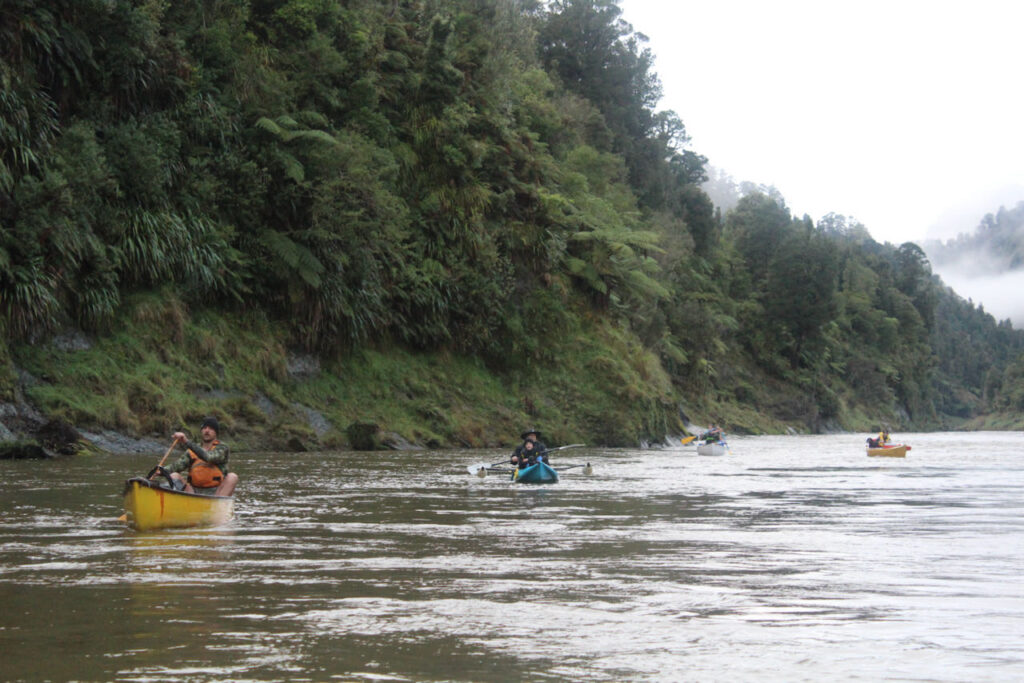 Day two dawned dull and damp. It just had that feeling like it was going to rain, and sure enough it started right around morning tea. Overnight it had loosely been decided that as we were deerstalkers, we should actually try to find a deer, so today we all set off at our own pace intent on finding somewhere to hunt. This is easier said than done because you still have a 30km paddle to do, and the country is generally either steep or damn near vertical. Well, the short story is the hunting was crap and no one found anything. We must have all figured this out at the same time because we all ended up together as we went past the bridge to nowhere. As we got closer to the Tieke Marae, we'd all drifted apart having our own adventures. James and I pulled in at the marae but on arriving, there was no sign of anyone. This was worrying as it’s a long way to the next campsite. We were at a bit of a crossroads - stay at the nice dry lodge and enjoy the comforts or get back on the river and chase them down in the rain and looming dark. I have to admit that I was leaning towards the comfort the fire figuring we’d find them tomorrow, but luckily James spotted them rafted up apox 500m down river. A quick whistle to get their attention and we had a good chuckle as we watched them slog back up river. 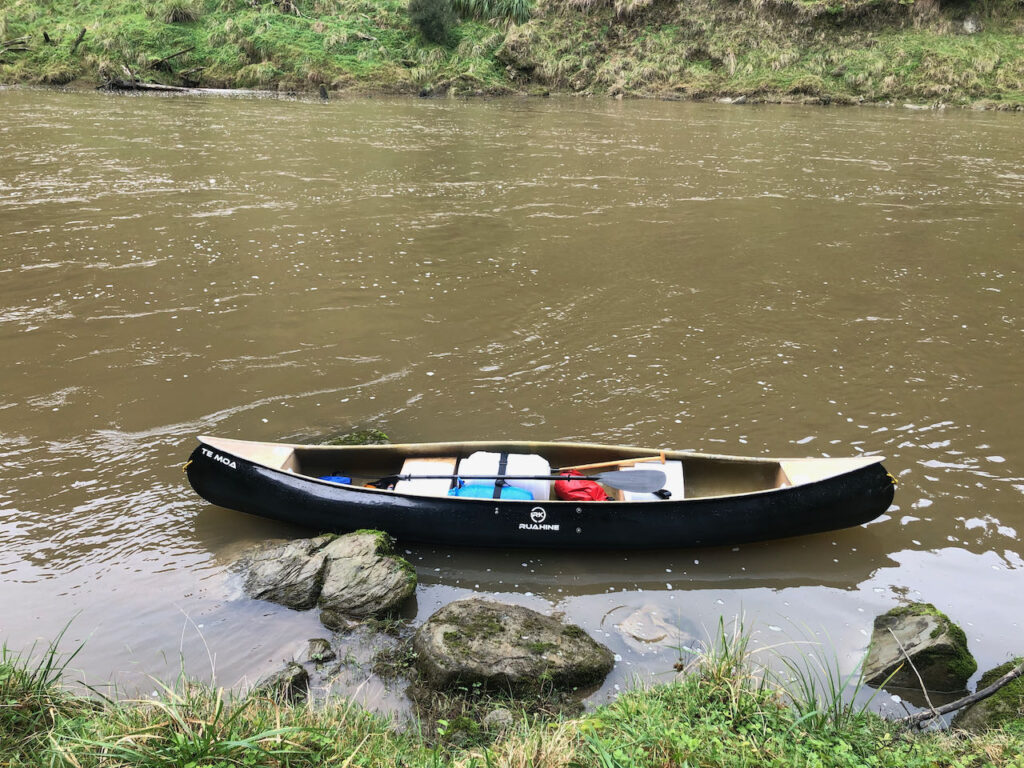 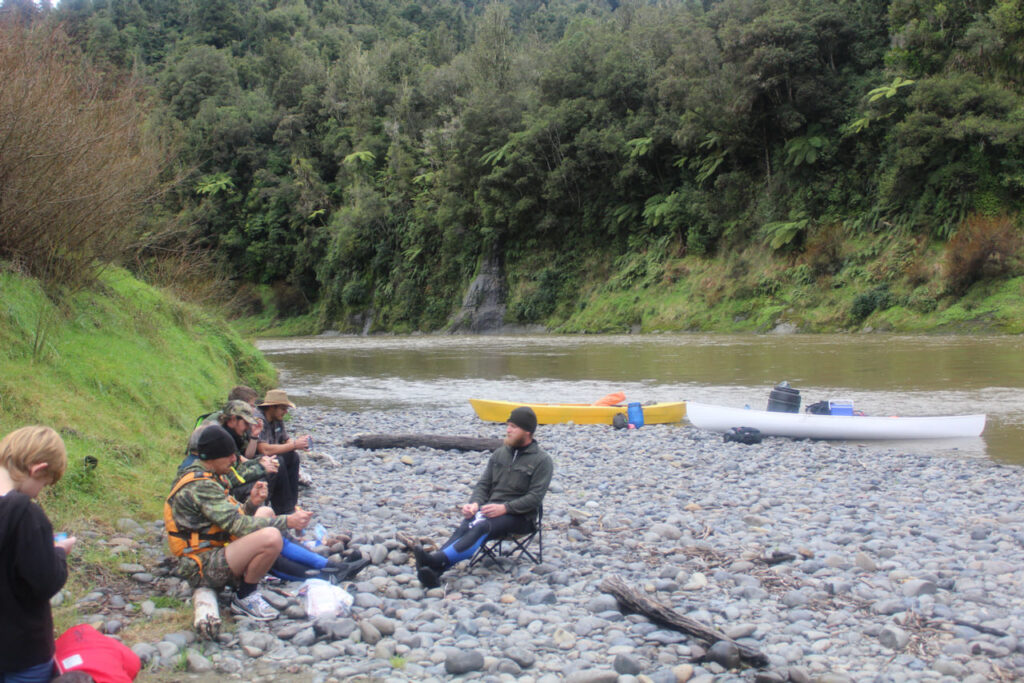 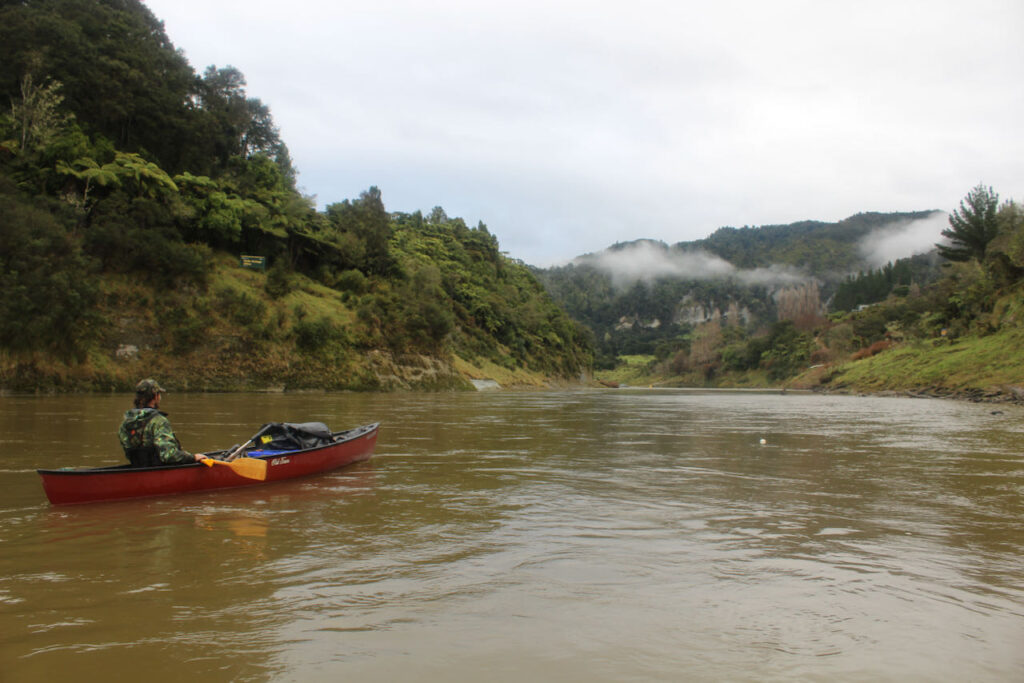 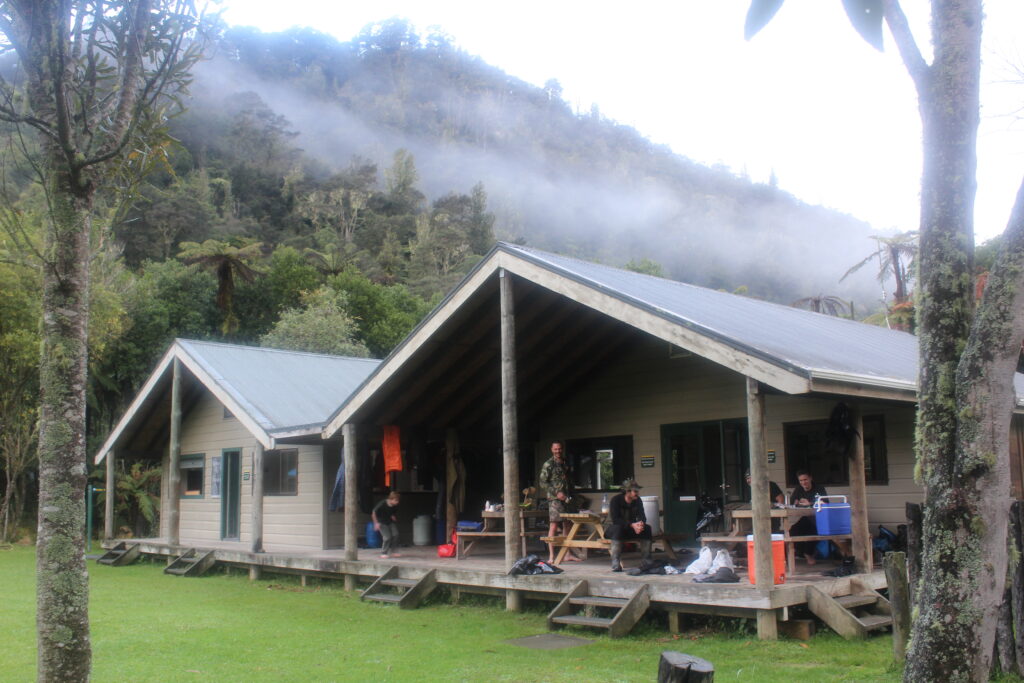 Curled up around the fire, we had a pleasant night at the Tieke marae but come morning some bright spark decided we needed to be up early with the hope of catching a deer out. Picture this, it’s absolutely pouring down and pitch black, but here we were standing next to our canoes waiting for it to get light enough to see. What a great idea that was! The rain continued for most of the morning and it seemed the goats weren’t that keen on it either, we just had to put our heads down and grind it out. In the last few kilometers of the trip you start to encounter a few small rapids. One of them is called 50/50 as apparently about 50% of people fall out. I think we were all secretly looking forward to a bit of action but after paddling through it young Gideon remarked “that was fun, when are we getting to the actual rapid?” The high river level had meant for a quick trip but sadly it had washed out the fun parts.

We finished at Pipiriki around 1pm. Despite a wet couple of days, it had a been a great trip and the general consensus was it was well worth it. The whole crew had been top notch and as you’d expect, there had been a fair amount of banter. We’d had the river and huts entirely to ourselves, and the higher water meant the paddling was both quicker and easier. To top it off, Reuben had organized a shuttle driver to pick us up so for a few bucks we saved 6 hours of car shuttling. It wasn’t long before I noticed 7 heads nodding away in slumber, even the dogs were out to it. It was welcome bit of luxury before we started the drive home.  Cheers to Reuben for organizing and to everyone for making it such a good trip. 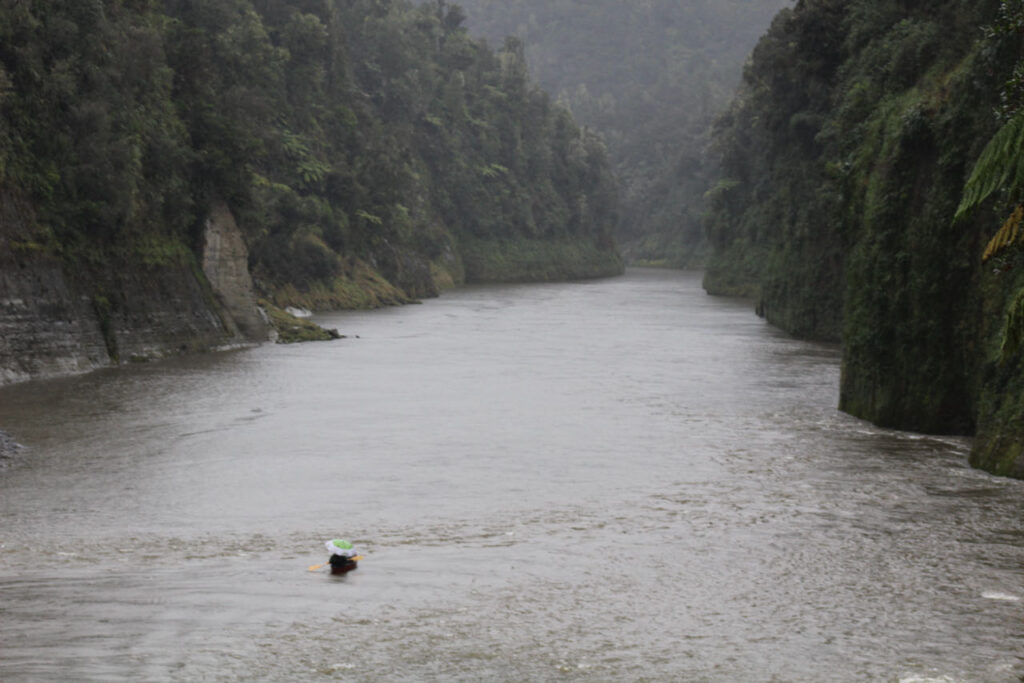 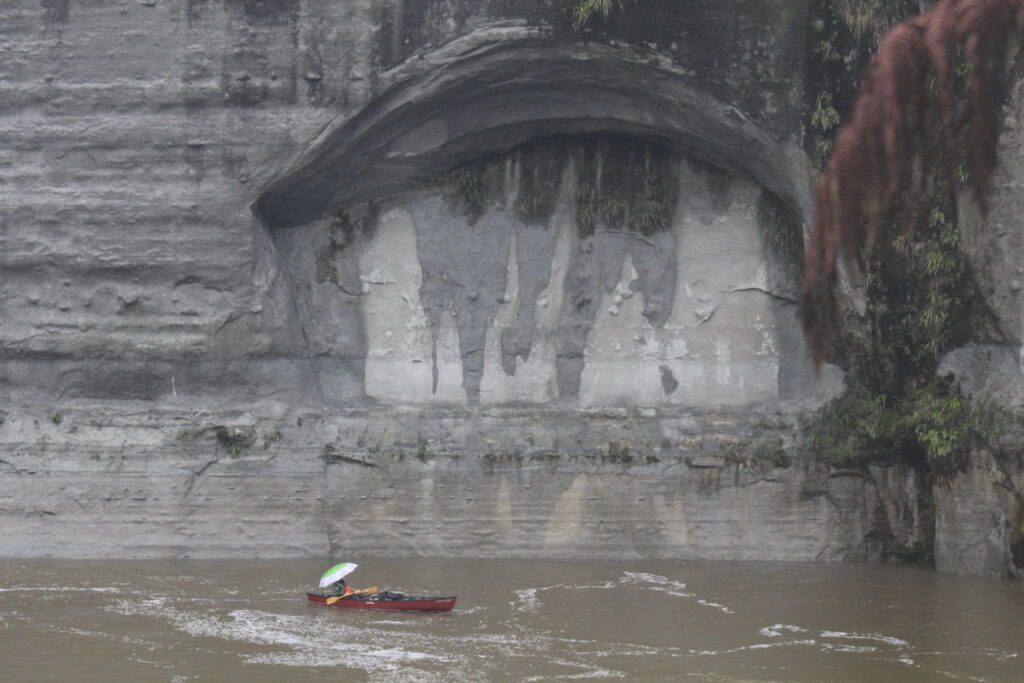 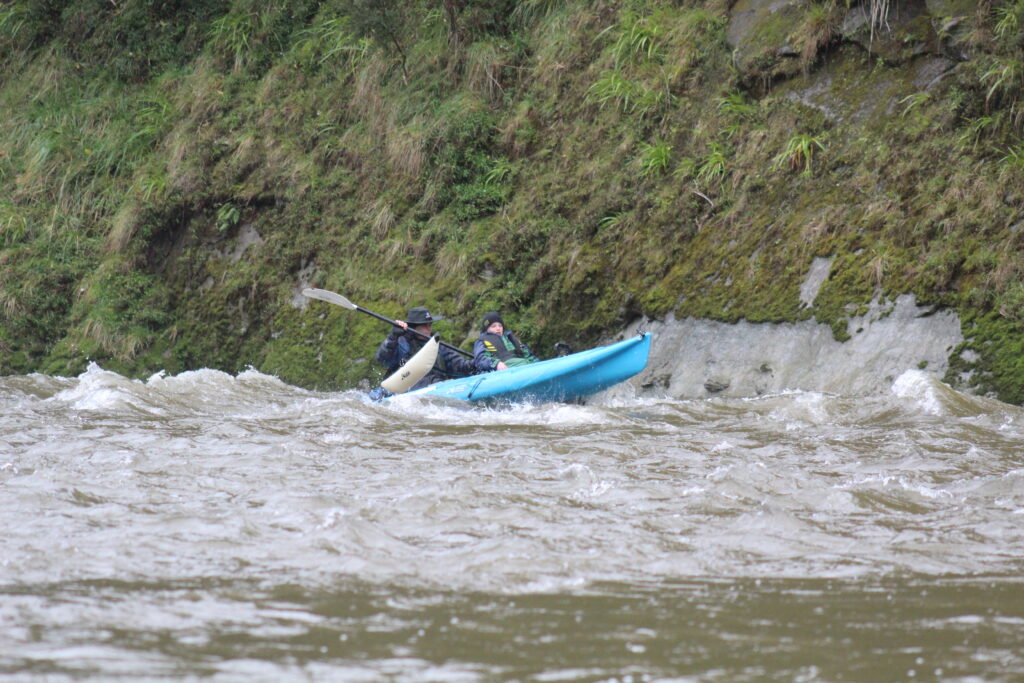 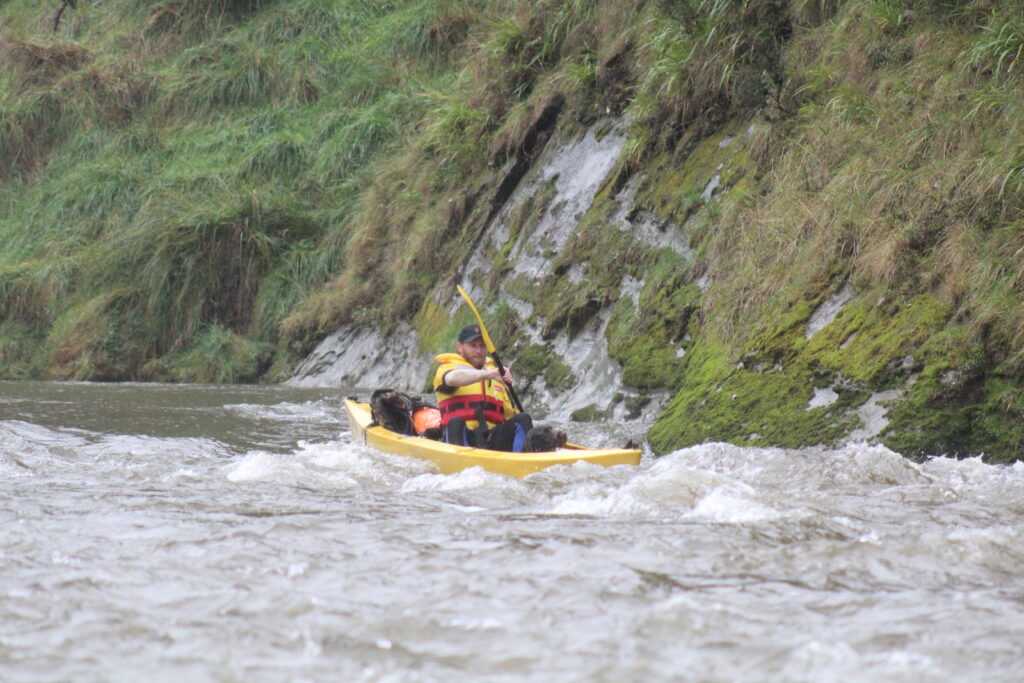